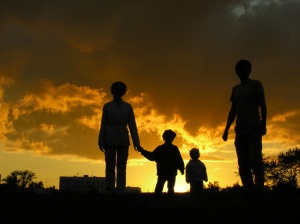 “To raise healthy kids, simply put your marriage first and your children second,” says David Code, author of To “Raise Happy Kids, Put Your Marriage First” in a Boston Globe interview.  (Read the full interview here.) Code adds that many individuals escape from their marital problems by focusing on the children. “The truth is, we often find it easier to be with our kids than our partners,” said Code. “This seems child-friendly, but we don’t realize we’re using our kids as an escape from our spouses.”

A minister and family coach, Code found couples coming to him to save their marriages when they were already on their way to divorce court. Others wanted him to fix their children, but he saw it was the household that needed repair.

The biggest myth of parenting, says Code, is that the more attention we give our kids, the better they’ll turn out.  He says we’re killing ourselves to create perfect childhoods for our kids. “Where are the results? Studies show today’s parents spend more time with their kids, and yet…they seem more troubled, entitled and needy.”

How does this slide happen? Children’s needs seem more urgent and constant than the marriage, which is important but not urgent. Little by little, parents pull away from the marriage to focus on their needs. The damage is done slowly, often without even realizing it. “Not only do we lose our marriages, we set a poor example for our children’s future marriages, and we also create highly anxious households where our kids soak up that anxiety and then act out,” said Code.

Code suggests overparenting can lead to anxious children who are over-praised, over-protected, and under-developed on skills of teamwork and cooperation. They’re less happy, and they’re less successful. Kids need to learn how to self-soothe, how to deal with setbacks, and how to be resilient. These skills train us for adult life.

Couples need to address their problems directly, understanding there is no such thing as a conflict-free marriage. In addition to placing too much focus on the children, issue avoidance can also come in the form of working long hours, being involved in too many children’s activities, focusing on electronic devices (from TVs to iphones), and making up “excellent reasons why we never have sex anymore,” explains Code.

Code doesn’t see the issue as the spouse’s needs outweigh the child’s. Rather, he sees that prioritizing the marriage benefits the whole family in the long run, even when it’s not clear in the short-run.

Even small changes can benefit the family, he says, including making time as a couple to talk about your day’s highlights and lowlights, taking regular walks together, and making weekly appointments for sex. “I’m not about going from chaos to perfection,” Code says, adding a five perfect improvement can pay huge dividends. “Over a lifetime, that five percent improvement could make the difference between your child graduating from college, getting divorced, or raising a child with mental illness.”

Far from being a perfect parent, Code says his research has changed his parenting, saved his marriage, and made his children more self-reliant. If you missed it, read Who Gets More of Your Attention–Your Children or Your Spouse?

I think his points are on target. I’ve talked to a few people who admit their marriages failed because they became fully devoted to their children at the expense of their spouse and marriage. Kids are so loveable, so easy to forgive, and so willing to take all your time and adoration. Their futures seem so full of promise that we believe if we only do all the right things, they will be successful. Instead, helicopter parenting (hovering) stifles the realization of their potential. We need to create limits (bed times, time to be with just our spouse) and allow them to develop independence while reuniting with the person we married.

What are some ways you can achieve a five percent improvement by shifting attention from your kids or other activities to your marriage?