Why divorce rates are declining

Divorce is on the decline according to new research announced in the New York Times. Rates have been declining for three decades, after peaking in the 70s and 80s. “The divorce surge is over,” says the paper.

That’s the good news. However, marriage itself is experiencing a significant decline.

Still, good news is good news, and additional reasons are given for the decline in divorce. These include:
*later marriages, which appear to be more stable;
*fewer couples choosing to marry, and the ones who do make the commitment are serious about marriage;
*less stringent gender roles with more sharing of child care and home care; and
*more couples choosing to marry for love (say the researchers).

There’s another caveat though. The divorce decline is concentrated among people with college degrees. Of the college educated couples who married in the early 2000s, 11 percent had divorced by year seven of their marriage. Of couples without college degrees married around the same time, 17% divorced by year 7. These rates are still probably lower than you thought, though, with the pop culture myth commonly repeated that “half of all marriages end in divorce.” Not even close.

As a result of fewer divorces, many more children may be able to witness their parents’ stable marriages and perhaps learn how to create their own stable families. On the flip side, simultaneously, a record number of children are being raised in one-parent homes—by both never-marrieds and divorced parents.

Unfortunately, poverty rates and income inequality can become huge problems for children in single-parent homes. According to the National Survey of Children’s Health report, only 6 percent of children in married-couple homes have no parent who works full-time. For kids being raised by never-married single mothers, the comparable figure is 46 percent. The Boston Globe provides details in “Two Parent Families have Decreased, and Economic Inequality Grows.”

We’ll take the good news, but keep in mind we have some work to do before we can claim family stability.

Still, don’t believe the hype that marriages are doomed to fail or that most of them fail. Work to make yours a success. And remember, the good news isn’t all it’s cracked up to be, particularly for those in the lower economic and educational spectrum.

For more details, read “The Divorce Surge is Over, but the Myth Lives On” from the NYT.

Lori Lowe has been married to her husband, Ming, for 19 years. She is the author of First Kiss to Lasting Bliss: Hope & Inspiration for Your Marriage. It tells the inspiring, true stories of couples who used adversity to improve their marriages–from overcoming drug addiction to cancer, infidelity, religious differences, and infertility, among many others. It’s available at Amazon.com and in various e-book formats here.

Great news about marriages: 80% are happy 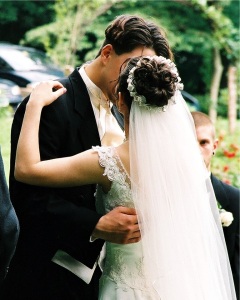 What if I could snap my fingers and make 80 percent of marriages happy? And cut the divorce rate for first time marriages in half? Consider it done.

What if everything you thought you knew about marriage statistics was wrong?

How often have you heard people—journalists and even counselors and pastors—cite the 50 percent failure rate in marriage? The true divorce rate is much lower and always has been. What percentage of marriages do you think are happy?

Harvard researcher Shaunti Feldhahn and her husband Jeff were marriage counselors and authors who used to cite incorrect data that is commonly bandied about. After being unable to support the data, they spent eight years digging through complicated marriage research and revealed the results in their new book, The Good News About Marriage.

They report that between 20 and 25 percent of first marriages end in divorce. While this is more than we would like, it’s better than what most believe. Divorce rates are even lower among active churchgoers, whose chance of divorcing is more likely in the single digits or teens. (Active churchgoers have divorce rates 27 to 50 percent lower than non-churchgoers, they say.)

The 50 percent divorce rate commonly cited came from projections of what researchers thought the divorce rate would be come if they stayed on trend in the 70s and early 80s. However, those numbers were never realized, and the estimates stuck in popular culture.

BIG problems resulted from this false assumption. First, many couples avoid marriage entirely because of their incorrect belief that half (or more) of marriages fail, AND that those who do stay together are mostly unhappy. Why bother? Popular belief is that only 30 percent of marriages are happy. Again…wrong. Four out of five marriages are happy. And even for those who are unhappy, the researchers point out that if they stay married for five years, almost 80 percent of them will be happy five years later.

Second, the high (false) rates of marital failure cause a sense of hopelessness among couples who struggle. If they feel a happy marriage is not attainable, they may throw in the towel.

“That sense of futility itself pulls down marriages,” Feldhahn said. “And the problem is we have this culture-wide feeling of futility about marriage. It’s based on all those discouraging beliefs and many of them just aren’t true.”

She hopes that these new insights will give couples hope that they can be successful. Indeed, they have a good chance at being successful.

Changing the way we think about marriage and talk about marriage is meaningful and helpful. When you hear discouraging comments about marriage, Feldhahn says we need to say, “No, wait. Most
marriages are strong and happy for a lifetime.”

When a friend is struggling in his or her marriage, remind them that the odds are in their favor. Change the conversation in your corner of the world to shed light on these false assumptions.

Source: Divorce Shocker: Most Marriages Do Make It, CBN News

Lori Lowe has been married to her husband, Ming, for more than 18 years. She is the author of First Kiss to Lasting Bliss: Hope & Inspiration for Your Marriage. It tells the inspiring, true stories of couples who used adversity to improve their marriages–from overcoming drug addiction to cancer, infidelity, religious differences, and infertility, among many others. It’s available at Amazon.com and in various e-book formats here.