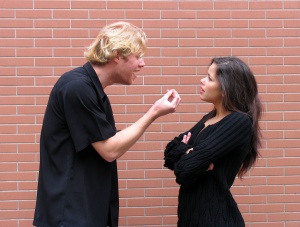 Claire Kamp Dush, assistant professor of human development and family science at Ohio State University was the lead author of the study. “There wasn’t much change in conflict over time,” she said.

Many of the couples were interviewed five times during the duration of the study from 1980 to 2000. Conflict was measured based on how often respondents said they disagreed with their spouse.

One tip learned from the low-conflict couples is that they were more likely than the moderate- or high-conflict couples to say they shared decision-making with their spouses. “That’s interesting because you might think that making decisions jointly would create more opportunities for conflict, but that’s not what we found,” said Kamp Dush.  “It may be that if both spouses have a say in decision making, they are more satisfied with their relationship and less likely to fight.”

Researchers also found the low-conflict couples were more likely than others to say they believed in traditional, lifelong marriage. Because of this belief, they may be more apt to let disagreements go, say researchers.

The healthiest marriage types were those in which spouses validated one another, were engaged with one another and were happy. About 54 percent of couples had lower conflict levels, equal decision making and high and middle levels of conflict. They had low levels of divorce.

Less healthy types were those who were in avoider marriages; 6 percent of couples studied included this type in which husbands were not involved in housework. They had traditional gender roles, and avoided conflict because of their belief in lifelong marriage. And 20 percent were in volatile marriages. Those in hostile marriages were most likely to divorce.  For more details on the study, read the article provided by Ohio State University at PhysOrg.com.

If your marriage has high levels of conflict or hostility, you may need professional help to change these patterns, which are clearly very difficult to break.