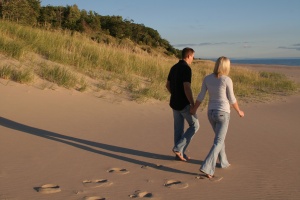 File this one under “unfair for women.” You may have heard previous studies that show marriage extends life expectancy for both men and women. That still holds true. Studies have also shown men who marry younger wives live longer. (Also, still true.) It was assumed that women who marry younger men would receive a similar boost in life expectancy. But a new study reveals a surprise result: the opposite is true. Women who have a significant age gap with their spouses—either older or younger—experience a decline in life expectancy.

The study was done by Sven Drefahl of the Max Planck Institute for Demographic Research in Rostock, Germany, and included two million Danish couples. The results were published in the May 12 issue of the journal Demography. (A study based on American couples might yield different results.) Drefahl found:

• Women who marry men seven to nine years younger than they are increase their mortality risk by a whopping 20 percent.
• A husband who is seven to nine years older than his wife reduces his mortality risk by 11 percent, compared to couples of the same age. (He lives longer.)
• For women, the greater the age difference with her husband (whether older or younger), the lower her life expectancy.
• Women live longest when they marry a spouse of the same age. An older husband shortens her life, but a younger husband does even more so.

Why is life expectancy reduced for these women?
Women worldwide live a few years longer on average than men, and being married increases life expectancy for both. So all married women have these two advantages. However, Drefahl suggests women who marry men who are significantly different in age have increased life stresses and reduced social support, as a result of the perception of having violated social norms.

His conclusion (thankfully) was much different from my hypothesis of the older wives engaging in dangerous adventures (i.e. skydiving and mountain climbing) and youthful activities in hopes of keeping up with their younger men. If social mores truly impact life expectancy, the question is, will this result change as society becomes more accepting of couples who are different in age? With celebrity couples like Demi Moore and Ashton Kutcher, and popular shows like Cougar Town, maybe it’s even becoming glamorous for older women to be with younger men? (I haven’t seen the show, so feel free to comment about cultural influences on the issue.)

I have lots of friends and family who differ in age with their spouses. It doesn’t seem to impact their lives very much. Do you think society still holds negative perceptions when spouses are different ages? Are you surprised by this study’s result?